Finish Only, shot with staged furnishings

This custom home was designed and developed from the ground-up by Studio 818. From concept to move-in ready the Studio 818 design + build management team handled the hundreds of moving parts necessary to bring this new Mid-Century Modern home into reality.

A corner lot normally presents challenges with privacy and a lack of light flow into the interior of the home. A narrow corner lot like the one #MidMod sits on also allows passers-by to see three out of four sides of the structure. No hiding imperfections in design on a lot like this. When we initially envisioned the architecture and design we’d use for this location we looked to Mid-Century Modern homes built in Southern California for inspiration.

In our visits to Palm Springs we noticed the majority of homes built during the Mid-Century Modern era maximize privacy while creating a sense of openness when inside the home. For #MidMod we designed a private street-facing façade that combines solid walls, linear wood fencing and green walls to compliment the clerestory windows. The concrete walls visually anchor the garage/guest house to the main house while providing privacy for the pool and outdoor living areas.

To allow light to flow freely throughout the interior of the home while maintaining privacy we incorporated another attribute common to Mid-Century Modern architecture. We designed a system of clerestory windows that span the perimeter of the exterior walls which floods the interior spaces with light. The roof structure was precision-engineered allowing the interior ceiling to flow seamlessly through the clerestory windows into the underside of the exterior cantilevered roof.

(There are lots more details on this custom home further down this page below the portfolio images.)

More than a ‘nod’ to Mid-Century Modern

To imbue #MidMod with a Mid-Century vibe there were a number of architectural features that were critical to incorporate into the design. The biggest challenge was to engineer a roof structure that would create the illusion of a cantilevered roof.

This type of roof structure was a common feature with the original Mid-Century Modern architecture of the 20th Century. Sounds straight forward enough. But this was a major engineering challenge considering the structural requirements to meet South Florida’s hurricane-related building codes. Add to this the fact that maintaining proper architectural positioning of the clerestory windows was critical and we had a major engineering challenge.

The effort was well worth it as #MidMod’s distinctive architecture makes it a stand-out among other new construction and custom homes in the area. An added benefit is the energy efficiency of the sealed attic system the home employs.

The exposure of a corner lot location presented many challenges to creating a bright space while maintaining privacy. We strategically designed clerestory windows along the front (North) and sides (East & West) to allow for natural indirect light to spill freely throughout the home while still providing privacy from both street sides.

From inside the home we focused on the dramatic views of the pool and private outdoor entertainment area. We designed 10 ft. full-height windows and sliding door system overlooking the pool in the open concept kitchen/dining/living area.

Many iconic Mid-Century Modern homes included a structural wall that ran through the heart of the home. These walls typically extended through the outside of the home seemingly penetration the exterior walls. These structural feature walls were often clad with a stone, linear brick or articulated block to add interesting texture.

This structural feature wall design has been incorporated into #MidMod with a nod to the tropical setting of South Florida using limestone imported from Spain. The custom fabricated stone has a unique texture with crustacean fossils embedded throughout which provides a subtle tie-in with the nearby Atlantic Ocean. When you see it in-person this is one of those textures that will prove irresistible to touch.

The pavilion effect on the rear of #MidMod was more done out of necessity due to site conditions than being rooted in a design intent. The elevation of the lot pitches significantly from North to South. With the separate garage/guest house being on the South end of the property a grade transition from the garage floor elevation to the floor elevation of the main house was required at some point.

We played with that for over two weeks in the early stages of the design process and finally decided the most aesthetically pleasing transition would be directly adjacent the main house. Janie was adamant about the steps running not only the full width of the main house, but also wrapping around both sides of the home to create the ‘pedestal’ effect.

It worked out well in the end as the pool and outdoor living area feels just separated enough from the interior while still allowing the seamless visual and functional flow between the inside and outside areas. 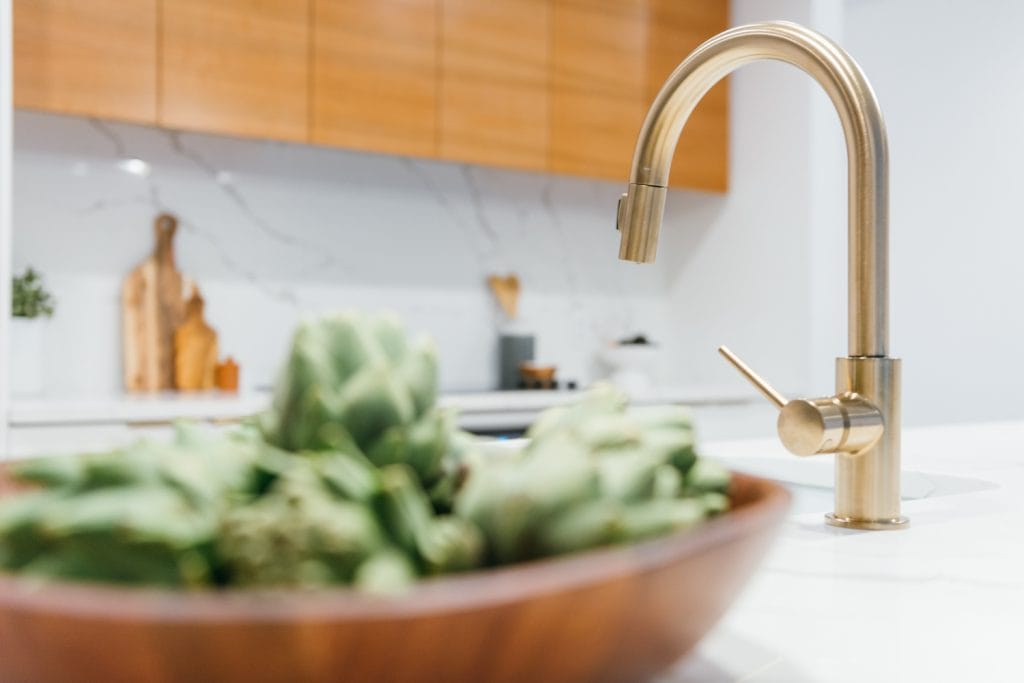 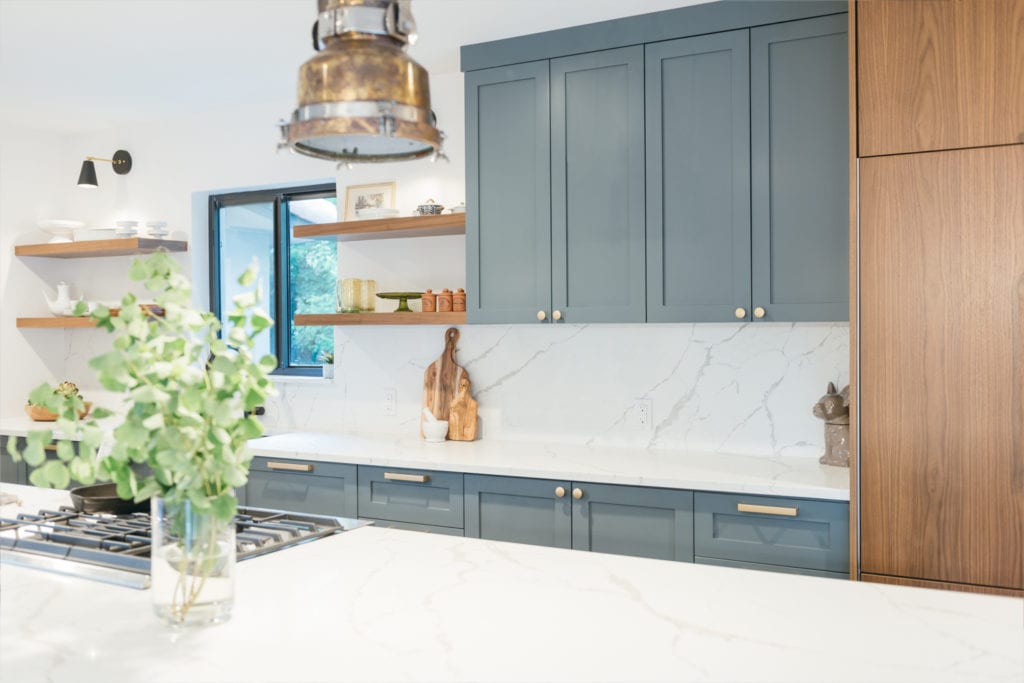 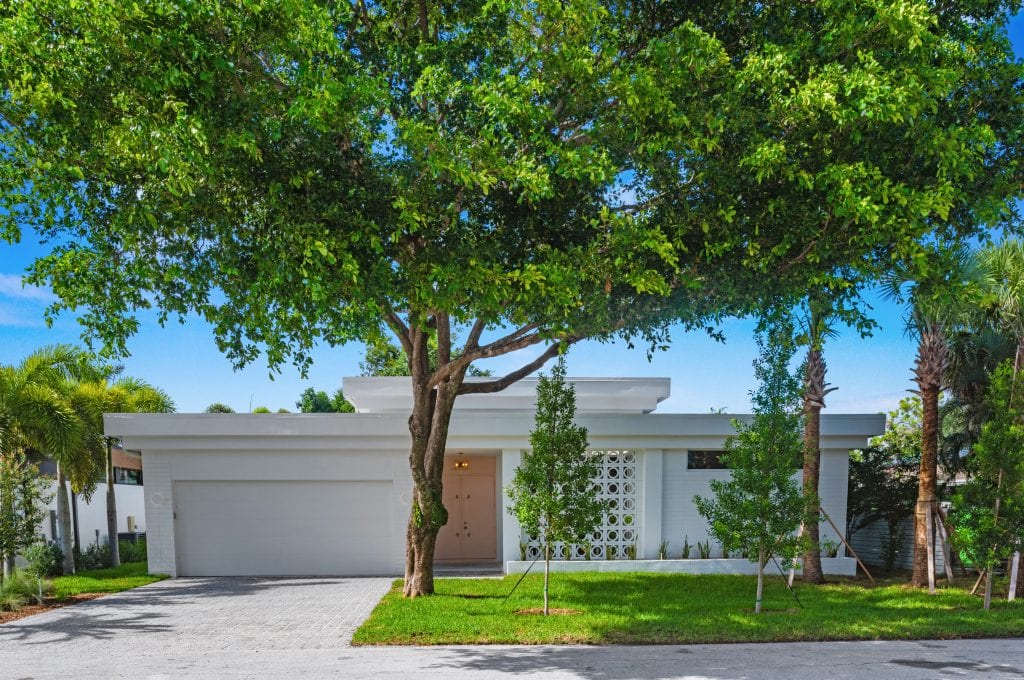 Custom Homes, Finish Only
← Previous Project All Projects Next Project →